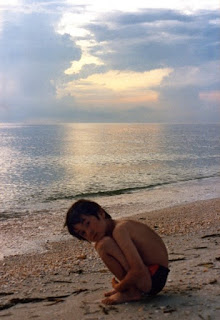 I was born in a cold place during the coldest time of year.  My parents were both immigrants and never liked the cold –neither did my sisters and I.  In 1992, my family started going down to Florida for one week out of the year.  We were always excited to go south and leave winter behind.  The excitement always reach its climax at Disneyworld leaving us in a calm wake for the rest of our time in the sun.  My parents would try to find rural beaches where there weren't a lot of people (other tourists).  They would argue when they got lost, my father always did the driving (he was always a terrible driver but he always drove*).

Once we made the mission to Key Largo.  Saying those words today ring with a sense of serenity only a child could understand and experience.  My family would spend the entire day at the beach.  I remember the sand always being too hot to step on when we arrived.  I'd hop around like an electrified beach crab with my claws racing towards the heavens.  I built sandcastles and struggled to hold their form as the tide came in.  I would bury my feet into sand and test my strength again the incoming waves.  The sun would cover my skin with kisses as left behind its flesh against mine.  Before I knew it the sky had turned an orangey pink and the clouds a deeper shade of blue.  The sound of the waves would come into the foreground with swift intensity and the sun would burn brighter and brighter shades of red as it reached the surface of water.  The world grew silent in those last few minutes of sunlight.  The sand was now cold against my sandy feet.

It would be twenty-four years before I would feel that same sense of peace.  It  returned the moment I first stepped on to a wa'a.  The wooden deck sunk beneath my feet.  The ocean rocked the canoe gently giving life to my next few steps.  I looked around the deck and on to the ocean that surrounded the crew.  We swayed with the rhythm of the sea and I suddenly realized all I could hear was the sound of the waves of water crashing against themselves and against the hulls –unaccompanied by the buzz of machines.

I will never forget the feeling and I will never be able to describe what it felt like.  Call it spiritual, but first reinvent the word: describe it as having once felt like one did not belong to suddenly having no concern, or perhaps feeling abundantly alone only to arrive in realization that one in great company.  Maybe it is possible that I am using the wrong language here, so I'll get back to you when I am more proficient in Hawaiian.

*He drove to Florida non-stop from Toronto, Ontario.  He did it each year.  Years later we were driving (my father was driving) back to South Padre Island, it was late at night and my father was getting sleepy.  The moment his eyes closed for longer than a blink he would give a loud shout.  I thought I was awake until I heard him yell.  It sounded as if a small bolt of lightning suddenly gave him a new life.  He would repeat this once or twice an hour and each time it made me laugh.

Posted by BrendanGeorge at 4:50 AM

FADE IN (fade out)
IMAGE BLOG